History and Cultural Tradition of the Australian Indigenous

Disclaimer: This assignment was submitted to us by a student, to help you with writing your own business assignment.

According to (Altman, 2006) the indigenous population approximately around 120,000 and about 1,200 people live in discrete communities and very remote communities, but these communities are small compared to a number of the population it’s merely average only 100 people each. Moreover, indigenous population total about 25 percent and 20 percent of the population has live in outside an area which covers more than one million square kilometers (Altman, 2006). According to (ABS, 2016) data indigenous people have different groups and their own language within this, it will lead indigenous people at risk, affected negatively from the workplace and hardly for searching jobs in future. The thesis is that issues with economic, therefore, a passive welfare has continuously corrupted to the indigenous social relationship. Consequently, to assimilate the communities in Australia and economic development, the Australian government has launched a new ‘Strategy’ 2018 for indigenous people to help them has a better chance and opportunity as non-indigenous. Therefore, young indigenous people can get a proper education, better jobs and get more income to support their families.

(Education) as you can see data showed a Year 12 attainment about 47.4% age (20-24) young indigenous will be a success completing education, while 83.3% same age groups data showed from non-indigenous people who achieved a huge success, with skills, knowledge, and confidence with their ability to work. The gap between this has become an issue because nearly 36.4% of indigenous people are still lacking skills and proper education, plus lack of support and language barrier. 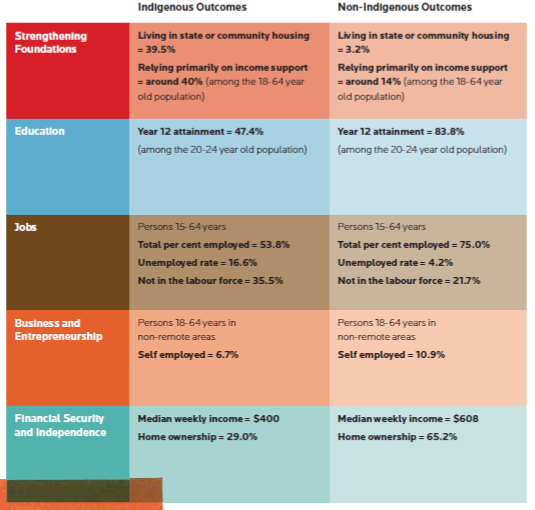 Figure 1: Differences In Economic Indicators Between Indigenous and Non-Indigenous

Another evidence to prove an argue close gap between indigenous and non-indigenous attendance is shown below: 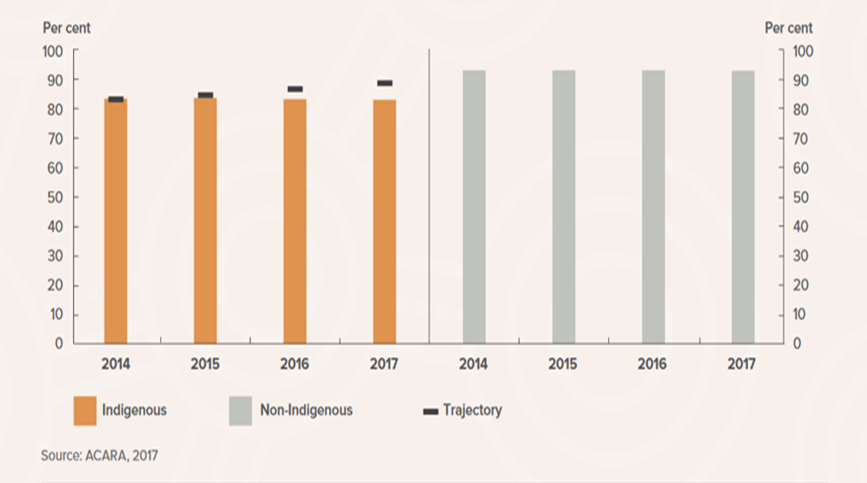 The fact according to The Indigenous Economic Development Strategy 2011-2018 (Strategy) there are several areas government need to be improved for the educational outcome such as: Improve access to early childhood education – government need to ensure that all the young indigenous people will have an access to a quality program early childhood this has been active in 2013, also government need to deliver a teacher with a quality teaching early childhood before a formal schooling start, under a National Partnership Agreement on Early Childhood Education. The government has spent more than $970 million over five years from 2008. Indigenous educational outcome – government need to work with an educational provider to support more teaching quality to young indigenous people wider and more effective by Plans Personalized Learning. Improve indigenous literacy and numeracy outcome – according to (Prime Minister report’s 2018) show data that in 2017, year 9 has reached an average of Trajectory, which in track according to the national level, whereas other outcomes were below than an average Trajectory. Particularly, more/or less indigenous student has achieved a national standard level in numeracy (Prime Minister report’s 2018).

The proportion for indigenous student data shown below, by looking at the result in 2017 student has reached the more minimum level when compared to the proportion in 2008 which is lower. This was clearly shown that Year 3 and Year 5 from reading and Year 5 and Year 9 numeracy. Nevertheless, by looking at the changing column 2008-2017, the gap between indigenous and non-indigenous are still narrow as we don’t know what will change in future. 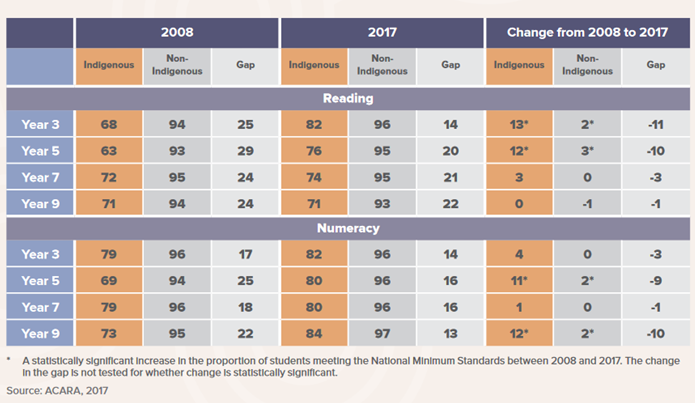 According to the diagram below, as you can see the number of student from non-indigenous people was higher than the number from the indigenous people. yet, there data shown indigenous number lightly increasing. Accordingly, to the gap between these two has been reducing with an improvement studying.

(Business Entrepreneurship) according to figure 1 table, a data show that indigenous outcomes age 18-64 in a non-remote area with self-employed 6.7% compare to non-indigenous outcomes age 18-64 a non-remote area with self-employed 10.9%. the successful indigenous business sector is vital to economic indigenous development. While an indigenous leader can show others how their culture can take part in the Australian economy are invaluable outcomes as mentors and their role model. Business undertaking with a high-risk will come with an increase in failure rate.

A number of indigenous employment are still comparatively low. We can conclude that the indigenous entrepreneurs are still lacking a benefit from opportunities in some major cities from their region. Therefore, entrepreneurship in a remote area or in region area will face with the indigenous additional barrier and it hard to become successful to operated business such as lack of business experience and business advisory expert, limitation access to information, lack of financial service, service provider and small local market (The Indigenous Economic Development Strategy 2011-2018). The Australian government will continue to corporate with their partnership to support their growth and success in the indigenous business sector in region area.

The government needs to support the growth fro indigenous business sector via encouraging indigenous people to seek advice from a business expert to help them with planning strategies from a key stakeholder for the sector, also encourage skills development – to promote indigenous people going through by participating in business administration and management training via the educational course. Build a knowledge base on the indigenous business sector – which needs to work together with ABS to decide a better solution, size, diversity, growth area and success factor from the private sector.

Another sector is most important are the financial sector, we can’t say that this is not a source of entire business, as indigenous people they need a financial support to help them start-up business or help then continually operate a business. To improve the access in this part indigenous need the government support to meet their need in business so they will be more client centers and services in business development regional area from start-up growth and business support program, to ensure that mainstream support business program is accessible for indigenous people and businesses networks. Removing barrier to accessing financial – need to work with the businesses leaders, to improve financial small and medium indigenous corporation. However, the private sector is also important, as you know the private sector is another option to help indigenous business bring them into the mainstream economy.

Altman, J.C 2006,’The future of indigenous Australia: is there a path beyond the free market or welfare dependency for our indigenous people’, Arena Magazine, no.84, p.8.

Closing the gap- Prime Minister’s report 2018, Department of the Prime Minister and Cabinet, viewed 29 May 2018, https://www.pmc.gov.au/sites/default/files/publications/ctg-report-2018.pdf.